What is the Social Media Marketing (SMM) Predictions for 2016? 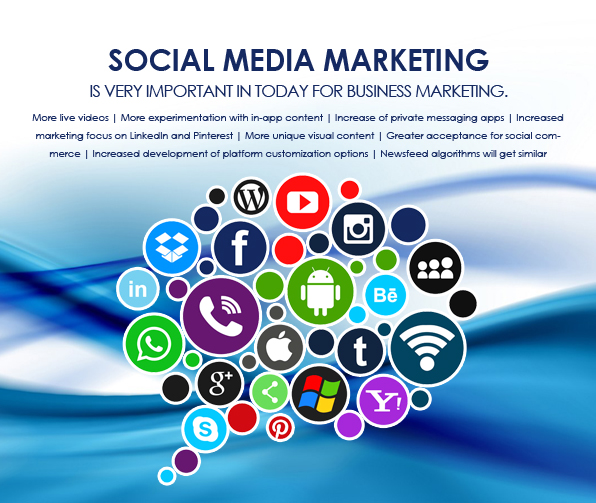 What is the Social Media Marketing (SMM) Predictions for 2016?

The first 6 months of year 2016 have already passed, and some interesting changes in the dynamics of social media have been witnessed already – whether it comes to the use of vertical videos in commercial advertisements by SnapChat or the big change in newsfeed algorithm from Instagram. The next 6 months are expected to be more exciting and there is already a lot of speculation among social media marketers about the kind of changes that will be witnessed. The following are some of the changes which are predicted by SMM professionals before the end of 2016.

These days, most of the apps are able to stream live content, whether it comes to Facebook Live with integrated features or individual apps such as Periscope. But the features have not yet received the kind of popularity that the mainstream features of the programs have got, although users are interested enough in them. Social Media Marketing experts believe that Live Video features will witness more acceptances by the end of 2016 and more individual users will start using them. However, these will be used more by organizations and companies given the fact that more entrepreneurs and advertisers have already begun to sense some potential in this feature.

For over a year, instant articles are being offered by Facebook in its content platform which is self-integrated. However, the results have been mixed so far. Google has also been trying to get “deep content” within apps as well as social media content indexed in its search engine results. With social platforms trying to shift more content to their individual apps and more content being made available to users by Google, it can be expected that in-app content is likely to be subjected to more experimentation. There will be more attempts at providing in-app content with higher visibility to users. But the exact scenario is difficult to predict as of now.

Private messaging apps like Snapchat have seen a huge growth in the first few years of release in the market, and some thanks may go to the rising privacy concerns for users. Messages tend to last only for a small time on the platforms. Although there has been some relaxing of the rules, messaging apps are still viewed as more private type of social app existing in the market at present. With a rise in user privacy concerns in social apps as well as anti-trust changes leveled at Google, it can be expected that developers will fall over each other to woo users with more private messaging apps and assure them that their information will be used in a more responsible manner.

A study conducted by Buffer has established that social sites like LinkedIn and Pinterest are slightly ignored where SMM campaigns are concerned. The users of LinkedIn are somewhat withdrawn from Twitter, Facebook and other social networking sites but the site enjoys wide popularity and usage. A study conducted by Shopify has revealed that 87% of users of Pinterest had bought at least one of product on the site and brands have witnessed higher user engagement and steady growth by posting ads multiple times every day on Pinterest. It is expected that marketing campaigns specially tailored for LinkedIn and Pinterest users will be considered more by the time 2016 comes to an end.

With Instagram enjoying higher popularity, it is clearly being understood how visual content is scoring more with the average user. Videos and images are becoming more popular and written messages and written content are not ‘hot” anymore. However, simply offering visual content through social platforms is not enough; this is already being done by any social app. Most of the social apps have similar features such as live-streaming filters and video. Unique visual content is what will be liked by users more and more. Apps will try to look for best ways to offer one-of-a-kind visual content formats.

In 2015, Pinterest gave birth to a new revolution with its “buyable pins” which are originally being viewed as “social hybrid” – a unique mix of eCommerce functionality and social media. It became very popular with lots of users resting their purchase decisions on Pinterest. However, other big names in social media such as LinkedIn and Facebook have not yet offered such an interesting combination – which can be attributed to concerns over user dislikes. But as marketing gets more advanced and targeted and users get accustomed to the idea of purchasing items over social sites, it can be expected that other social giants will follow the Pinterest model and come out with their own stuff by 2016-end.

Social media might be about connection and communication of users with each other, but it has to be admitted that these actually cater to each user on an individual basis. These apps personalize the experiences and newsfeeds to retain them and this is the main reason why newsfeeds are constantly updated in social apps. Social Media Marketing experts believe that users will see greater customization options by the time 2016 ends, particularly on Twitter and Facebook. From app display preferences to new manner of sorting algorithms, much more will be customized.

Newsfeed algorithms will get similar

The similarity of newsfeed algorithms is already being seen in the first 6 months of 2016. In February a new update was launched by Twitter which sorts the time-based post listings of the site into a particular order which is determined by relevancy that is sensed. Sometime soon after this update, Instagram followed this model with an almost similar update. Just like search engines have begun to offer similar type of search results on the basis of the amazing results of Google, the majority of social apps are gradually moving towards the similar newsfeed algorithm based on relevancy, slightly inspired by the Facebook update. It is expected that apps will begin to resemble each other more and more as the year draws to a close, as far as newsfeed algorithm is concerned.

Posted on Wednesday, October 26th, 2016 at 1:57 pm and is filed under Uncategorized. You can follow any responses to this post through the RSS 2.0 feed. You can leave a response, or trackback from your own site.