A Brief for Web Designers Worth Noting! 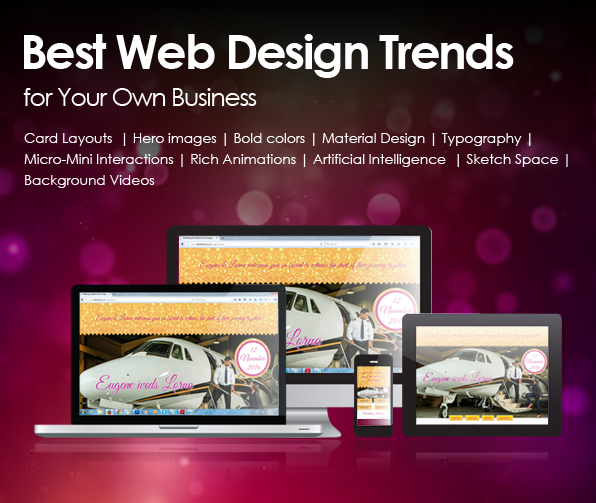 A Brief for Web Designers Worth Noting!

Web design is a very dynamic industry which is witnessing many trends coming into existence and even fading out as quickly. These days, websites look a lot different than even a few years. Web design has evolved in numerous ways, whether it comes to speed, performance, technologies and tools or user interface, best practices, workflow and more. This is improving the overall user experience. In the last few decades, web design has undergone a lot of change and the choices of users as well as the technologies used to render web pages have changed a lot. Read and know about the web design trends and find out which ones you can adopt for your own business.

This trend was brought to existence by social networking giant Pinterest, and these soon became widespread. These present important information in bite-sized cards which can be scanned very easily. Every card shows a unified concept. These are rectangular in shape and act like “content containers”. It is more convenient to rearrange these for various device breakpoints.

Visual appeal is bigger than anything else, and HD hero images try to capture the attention of users the quickest. Due to advances in data compression and bandwidth, users do not have to suffer from slower load times. Hero image over the scroll is a common layout that you can find, followed by a cards-based arrangement or zig-zag sections.

Object perception is influenced a lot by color and colors also convey a specific emotional energy which changes from one culture to another. This has a lot of impact due to being powerful and straightforward. There are some excellent redesigns to be witnessed in startup web designs such as those of Spotify, Medium, Airbnb and Uber. A constant growth in the bold color trend can be witnessed in 2016.

It was in June 2014 when the Material design language was launched by Google. However, the adoption took some time to take off. In 2016, designers understand Material Design much better and it is expected that it will be used more as documentation in designs. Material design centers on dynamic and tactile elements which remind of ink and paper. It consists of realistic shadows, overlapping items, interactions which are present within materials and do not affect surrounding materials. Material Design aims to produce modernistic and clean design which concentrates on UX. Most of Material Design projects have been restricted to only app design. But the Material Design Lite announced by Google in July is suited more to websites. This design uses JavaScript, Vanilla CSS and HTML to add the feel and look of Material Design to sites. There is no specific framework that Material Design Lite depends on. Naturally, different front end tools are used by designers to make websites. As far as coding is concerned, this is a lightweight designing language. Given that flat design has reached a saturation point, it is anticipated that the Google Material design language will be the new one to be taken up and used in many websites.

These are actually the name given to more than one microscopic interaction inside a micro-interaction. Each time someone uses his phone, he actually engages in numerous micro-mini interactions, whether in the form of Liking a friend’s photo on Facebook or turning on the alarm. Micro-interactions can be useful in carrying out many varied tasks, such as assisting users to manipulate anything, communicating a feedback or status or watching the result of an action. In any device or app, micro-interactions happen to be an important part.

The improvement in bandwidth is allowing designers to try animations freely, and use them for storytelling and making the user experience more entertaining and interactive. It is being interestingly woven into the personality and story elements of websites. There are two major groups of animations – Large scale animations and Small scale animations. The former is used as the main way of interacting with users and consists of pop-up notifications and parallax scrolling among other effects. The latter includes loading bars, hover tools and spinners, and no input from users is needed.

It is constantly improving and becoming more widespread in usage. Material design, Flat design and Responsive design have laid the path for the improvement of typography. These have set the trends of amazing fonts in the domain of web design. Handwritings and Serifs are making optimal use of various devices with higher resolutions and add a better touch to sites. The experimentation with fonts makes typography work perfectly even with other stylish elements.

The year 2016 will see greater penetration of Artificial Intelligence or AI in the web. There are smart virtual assistants already there – such as Google Now, Cortana, Alexa and Siri – making their presence felt already. These are slowly entering the lives of users, and having a smartphone can provide one with access to any of the AI units. It is up to the designers to make these more human.

It will be used widely for the designing of User Interfaces. This app can work only with Mac and has been specifically designed for mobile and web designers. It is fast acting as a substitute for Photoshop for every UI design job whether for low-fidelity wireframes or high-fed icon and mockups design.

Internet connection with higher speed as well as more advanced video plugins has made video integration into websites more convenient. More and more websites are putting up custom explainer videos in the background to make communication with users easier for the promotion of businesses. User attention is attracted easily and quickly with visuals, whether in the form of videos or images. Other than video, crisp, sharp and large HD images related to services or products are being used in the background. This trend is going to be more widespread as the year moves on.