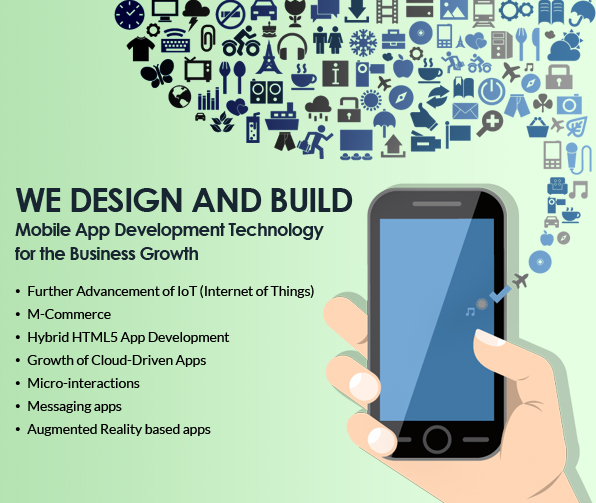 In the last decade, the mobile phone industry has grown leaps and bounds. The mobile industry is being shaped not only by the increasing usage of smartphones but also through mobile apps, operating systems and even associated devices such as smart watches. There are also other advanced technologies such as the Internet of Things and cloud computing which are making their presence increasingly felt in the mobile world. When it comes to mobile app development, developers are continuously experimenting with newer things and promising a lot of changes. These are some new trends expected to come into prominence in 2016.

IoT (Internet of Things) is poised to expand further and drive mobile app development to newer heights. There is considerable progress being made with IoT, and mobile app development is expected to grow with it. iWatch, Google Glass and various other wearable technological devices have already proven the power of IoT to incorporate sophisticated features. Although the use of IoT is focused more on consumers at present, it is going to be used for industrial and commercial purposes. IoT has already become an important component of mobile trends, and it is supposed to experience an exponential growth in 2014 – 2019.

A technology of the future, IoT is poised to be integrated into almost everything – which also includes mobile devices. Enterprises belonging to a few particular industries such as automotive, healthcare and energy have begun experimenting already with the integration of IoT into mobile into mobile devices. In the coming years, backend infrastructure for mobile platforms is also going to be improved in order to facilitate easier communication with all the devices that are paired with mobile phones.

Mobile Payments is still at a nascent stage, but things are supposed to change before 2016 comes to an end. The sales of tablets and smartphones are already witnessing a tremendous surge. According to analysts, the trend is supposed to grow more in the years to come. More and more buyers will turn to mobile commerce as a consequence. Google and Apple have already made an entry into the mobile payments industry with Google Wallet and Apple Pay.

The indicative growth of M-commerce means that app developers need to create mobile apps which can help in processing transactions without requiring any actual cash or credit or debit cards.

Most of the mobile developers like to use native mobile apps. However, for some years HTML5 has been gaining ground and showing a lot of elegance and performance when it comes to the development of apps. It is expected that Hybrid HTML5 app development is set to witness more traction in the mobile world, without anything to stop its expected growth. These apps have already shown success in consumer app and enterprise app development.

In the coming months, many enterprises are expected to follow this trend. At the present time, there is not any other platform to face off with Hybrid HTML5. This makes this trend quite reasonable to be considered. The Ionic framework is a rising framework for app development. Although it is newer in the domain, mobile developers are giving it a lot of importance. But it has to be kept in mind that native development should not be ignored due to the growth of Hybrid HTML5 development.

While the last year saw an integration of cloud computing with mobile app development, the trend of delivery of centrally interconnected apps is expected to become better in 2016. The Cloud technology is set to come with a number of advantages. App developers can use cloud support to retain the minute size of mobile applications and thus manage memory or bandwidth problems much better.
The cloud technology will also help app developers sync mobile applications across different kinds of devices such as Samsung Gear and Apple Watch. The number of apps offered by Apple to Apple Watch users is going to grow even more in 2016. With the aid of cloud compatibility, mobile devices and wearable gadgets can easily sync with apps as well as app extensions. A lot of mobile apps in the future are expected to be cloud-driven.

Micro-interactions through touch-sensitive single application design are quickly expected to grow more and more popular in the coming months. These features, dubbed by some industry members as “clunks” are expected to make the overall experience something closer to that of a game, helping users to get an extraordinary experience. The launch of the latest 3D touch technology by Apple on its iPhone 6 mobile phones brought fresh chances for micro-interactions. Users, without tapping on the app to open it, can execute actions fast in order to allow access much easier and also make interfacing more interesting.

Although there are various Messaging apps available for use at the moment, the demand and supply of these programs are expected to grow even more in the coming months. The tussle between mobile messaging apps and social networking websites is anticipated to get stiffer. The number of users of WhatsAle app, Facebook Messenger, Telegram and Viber is equal to that of Instagram, Twitter and Facebook. But the messaging apps have more influence and are expected to surpass the user count of social sites sometime soon. It has to be noted that messaging apps are used by as many as 35% of users of smartphones.

There has been a constant growth in the AR technology in the last 2 years, and the development is anticipated to become a big trend in mobile app development technology in the coming months. It has been used already by different enterprises in order to offer an immersive user engagement and experience. The coming months will witness the integration of augmented reality into mobile applications, in order to provide businesses and customers with a better business experience. It is going to change the way of participation for consumers and take mobile apps to a new direction.